Whether microscopic or monumental, the twentieth-century Afghan calligrapher Daud Hossaini (1894-1979) mastered all forms. With exceptional skill and artistry, he inscribed rice grains with multiple Quranic suras and penned over 550 words in a 2.5 cm square composition. He also designed large scale architectural inscriptions like those that adorn Kabul’s Triumphal Arch (Taq-e Zafar) and other modern monuments. As cultural advisor to the last Afghan King Muhammad Zahir Khan (r. 1933-1973), Hossaini belonged to the political and intellectual elite in Afghanistan. He held various political positions and oversaw the national printing industry.

Despite his intense political and intellectual career, he remained devoted to his artistic practice and was prolific. Unfortunately, only a fraction of his work survives today. The current location of some 300 calligraphy works owned by the National Archive in Kabul, for example, is not known. Others, gifted by the King Muhammad Zahir Khan to numerous global leaders are either lost or scattered in various archives waiting discovery and recognition.

The Museum for Islamic Art in Berlin recently acquired a portion of Hossaini’s work with a generous gift and long term loan from Hossaini’s son, Dr. Haschmat Hossaini. From 7 February to 3 May, 2020, the museum will present for the first time a selection of Hossaini’s artistic work with the exhibition Calligrapher to the King, Daud Hossaini. The exhibition aims to shed light on the artistic achievements of Hossaini, who was a modern master working in the long tradition of Islamic calligraphy in Central Asia. 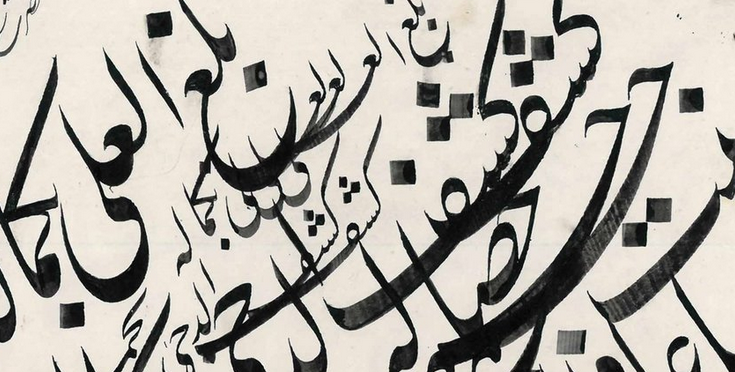