Dr. Mecsi’s lecture on “Early Photography of Korea in Hungarian Collections” will highlight the photography and collecting activities of two Hungarian visitors to Korea: Ferenc Hopp (1833-1919) and Dezső Bozóky (1871-1957). Hopp, an optician and owner of a lens manufacturing company, went to Korea on his third world tour in 1903, while Bozóky, a doctor in the military, travelled there in July 1908. They both portray the country during a crucial historical period, when it had just emerged on the international scene as an independent nation and was not yet swallowed up by the Japanese Empire.

Beatrix Mecsi is Associate Professor and Head of the Korean Studies Department at the Institute of East Asian Studies, at Eötvös Loránd University (ELTE) in Budapest. She studied European Art History along with Korean and Japanese Studies at ELTE University. After finishing her MA degree she obtained her PhD at the School of Oriental and African Studies (SOAS), University of London. She completed her habilitation in the field of East Asian art history in 2009. Her research interests include religious art in East Asia, text-image relationships, art theory and contemporary art. Apart from teaching at her alma mater, she also taught at SOAS, at the Sotheby’s Institute in London, and at Yonsei University in Seoul. In addition to her scholarly publications on Korean art, she participated in and co-edited the book The Land of Morning Calm: Korean Art in the Ferenc Hopp Museum of Eastern Asiatic Arts (Budapest 2012). The Ferenc Hopp Museum holds one of the most important collections of early Korean photographs in addition to Korean art and artifacts.

The talk is sponsored by the Korea Foundation within the framework of the European Program for the Exchange of Lecturers (EPEL) in cooperation with the Association of Korean Studies in Europe (AKSE). The talk has been organized by Prof. Burglind Jungmann for the Institute of East Asian Art History at Heidelberg University. 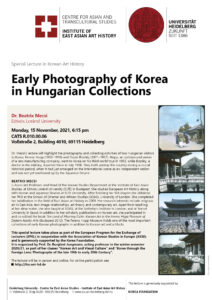