Title: Pots, Prints, and Politics: Ceramics with an Agenda, from the 14th to the 20th Century
Edited by: Patricia Ferguson
Published by: The British Museum Press, 2021

In this lavishly illustrated publication, 15 leading scholars challenge and interrogate a mixture of Asian and European ceramic objects—from teapots to chamber pots—bringing to light new meanings and agendas that are just as provocative now, as when they were made. The medium behind these messages are graphic sources. From Chinese woodblock prints to Japanese kyōka surimono (‘printed things’), and European copperplate engravings to chromolithographs, prints circulated ideas. Potters across time and cultures adapted these images into ceramic bodies or covered their surfaces with hand-painted or transfer-printed representations, giving expression to serious political and social issues: propaganda, self-promotion, piety, race, gender, national, and regional identities. Driven by commercial gain, altruism or imperial dictate, ceramic artists and manufacturers often risked their livelihoods, if not their lives, articulating their convictions.

The authors in this volume have explored these narratives on a variety of wares employing the British Museum’s world-renowned print collection as a base, as well as studying visual culture for material references. Pots, Prints and Politics invites us to look at ceramics as social objects, deciphering their many critical debates masquerading as mere ornament.

This publication has been generously supported by Ceramica-Stiftung Basel.

Patricia F. Ferguson was Project Curator in the Britain, Europe and Prehistory Department at the British Museum from 2017 until 2020, focusing on European ceramics and print sources. Between 2006 and 2017, she was a consulting curator in the Asian and Ceramics Departments of the Victoria and Albert Museum. As Honorary Adviser on Ceramics to the National Trust, she published Ceramics: 400 Years of British Collecting in 100 Masterpieces (2016) and Garnitures: Vase Sets from National Trust Houses (2016).

1. Pots, Prints, and Politics in China? Some Examples from the 14th to 17th Centuries
Luk Yu-ping (The British Museum)

4. ‘Take Note’: The Construction of Political Allegories of the Sack of Rome (1527) on Italian Renaissance Maiolica in the British Museum
Dora Thornton (Curator, Goldsmith’s Company)

5. War on a Plate: The Battle of Mühlberg on a Maiolica Dish at the Wallace Collection, London
Elisa Paola Sani (The Courtauld Gallery)

12. Propaganda on Pots: ‘King Louis’s Last Interview with his Family’ on a Creamware Mug, 1793–95
Caroline McCaffrey-Howarth (Victorian and Albert Museum)

14. ‘Remember them that are in Bonds’: A Plate Made for the Abolition Movement
Ronald W. Fuchs II (Reeves Center, Washington and Lee University) and Patricia Ferguson (Hon. Adviser on Ceramics, The National Trust) 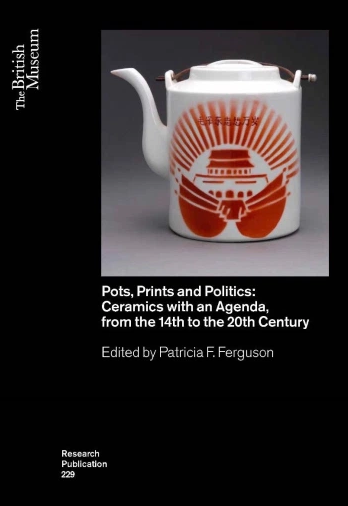